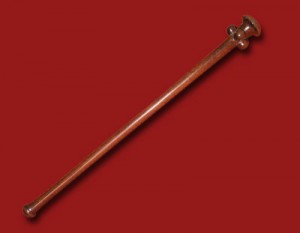 Clubs and Their Roles in the Societies of Oceania

This dossier deals with one kind of object of the Oceanian material culture, namely the club. The focus here is on the traditional culture of Melanesia from the 16th to the 19th century. Though the primary function of a club is that of a weapon, its symbolic and functional significance is much broader. War was an important means of social mobility and self-promotion. Therefore, as with other weapons – in areas outside of Oceania – the use of clubs was not limited to warfare but served several purposes. Worn as performative accoutrement by men and warriors, clubs were strong identity objects, enabling wearers to attain important social status. Killing an enemy in close combat, notably with a club, was considered an extremely powerful act as well as a way of acquiring more mana (=power). The club was also central to other rituals, such as the pre-war ceremonial dances as well as initiation ceremonies or the marking of transitional phases, which characterized the important stages of a man’s life. The polyvalence of its functions meant that the club took precedence over other weapons in Oceanian societies. It can not only kill, but also create identity.